LOGIN
Home All Wines Of Romania recommendation: Wine tourism at the Castle
AllJidvei

Wines Of Romania recommendation: Wine tourism at the Castle 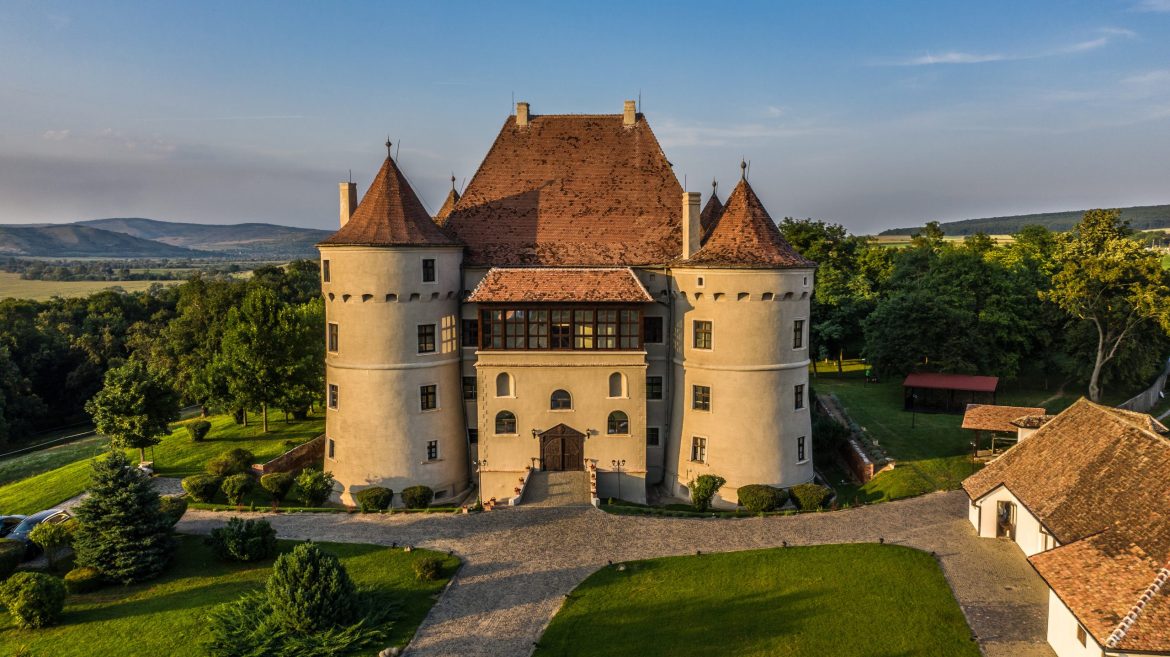 Bethlen-Haller Castle, the symbol of Jidvei wines, is more than just an imposing structure or a place to visit in Transylvania

Cetatea de Balta was one of the most important medieval fortresses on the Tarnava Mica valley, being documented in 1177. In 1489, King Matthias Corvinus gave the ruler Stefan cel Mare the fortress together with a vineyard in velt village, located a few kilometers away from the place where the Jidvei Winery is now. The fortress is located below, on the bank of Tarnava Mica, in a floodplain area, hence the name of the pond. Due to the fact that it was built of earth and stone, today there is no ruin of it.

A space steeped in history where time flows naturally, Bethlen-Haller Castle is a place where guests find the warmth to discover the stories that have accompanied the passage through time of these places. Stories about people, about the bounty of the earth and nature and about the craftsmanship that turns grapes into the finest wine.

Bethlen-Haller Castle was built by the father of the Chancellor of Transylvania, Miklos Bethlen, between 1560 and 1624, in a style of remarkable accuracy, modelled on the Chateau de Chambord, distinguished by its distinctive Renaissance architecture, with four towers set in the four corners.

Over the centuries, the castle has undergone numerous transformations: the construction of the current building was completed in 1642, and between 1769 and 1773 the castle was rebuilt in Baroque style. Today, the castle preserves both the main Renaissance architectural elements and some of the Baroque ones, and behind the castle there is a former decorative element bearing the inscription "Anno 1773". 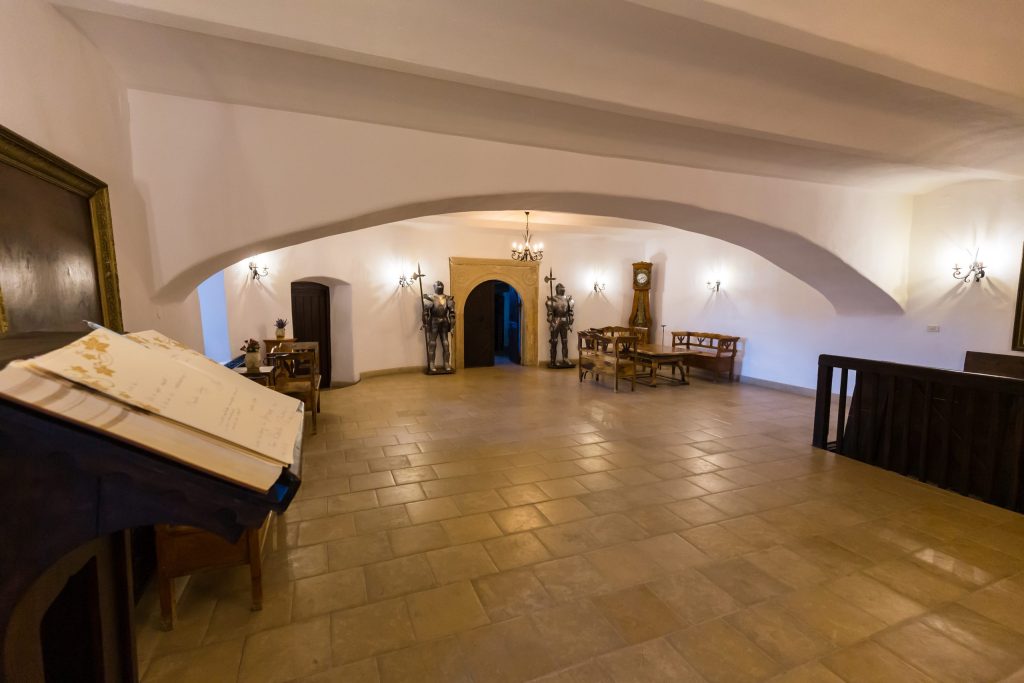 The building was designed as a hunting and leisure castle, not as a residence for defence purposes. Not being a permanent dwelling or of strategic importance, the mention and especially the description of the castle in the documents of the time is very poor, not allowing a very extensive documentation. Throughout the centuries, the castle has known periods of glory, but also of decline. It was inherited, donated, lost in gambling, confiscated by the authorities, redeemed and renovated, having more than 45 owners. The family of the headman Haller lived in the castle until its nationalization. During the communist period, the castle belonged to the I.A.S. Jidvei, where the sampanning department operated and the towers were used as living quarters for workers. It is a dark period in the history of the castle, when there were significant changes and destruction. Also disappeared then the decorative pieces, silverware and furniture of different styles, with which each generation of owners has personalized the castle spaces. 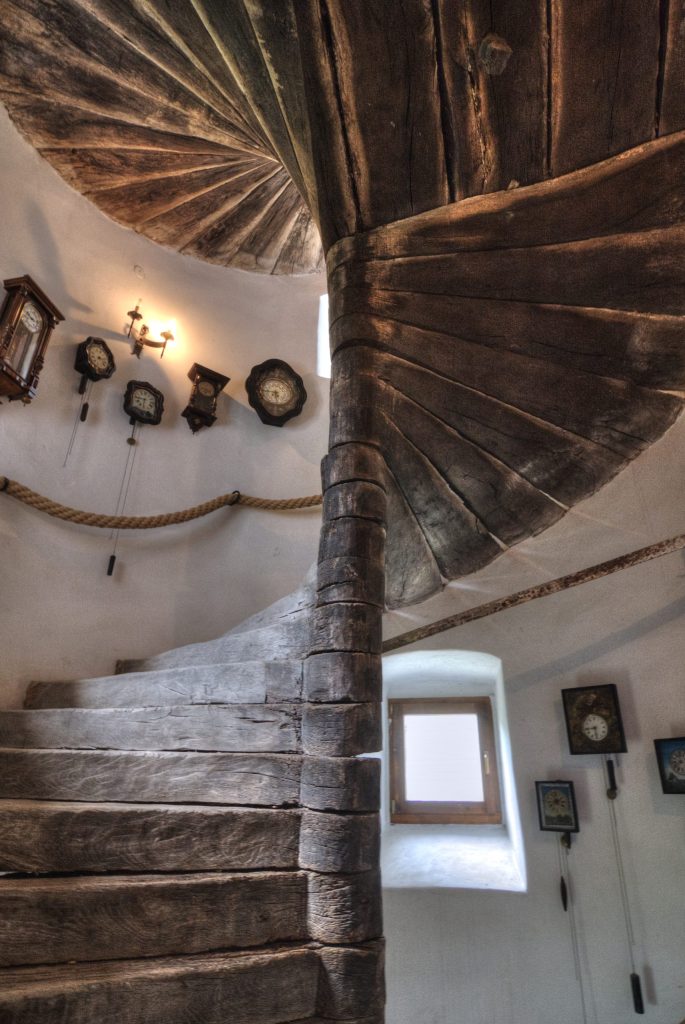 Restoration with attention to detail

After 1989, the Haller family claimed the castle, and its last descendant sold it to the Necsulescu family. The castle was brought back to light through an extensive and carefully planned restoration process, which began in 2003 with the study of the architectural structure and the materials used in the period when it was built. Numerous consultations were held with specialists in the field to enhance the architecture and simplicity of the interior spaces. The exterior space also underwent minimal intervention, with the emphasis on details designed to let the majestic building stand guard over the hills of the Tarnave Vineyard.

The first part of the complex process of renovation and restoration aimed at restoring the castle’s medieval air of yesteryear.

Recovery of the coat of arms

The coat of arms of the Bethlen family, which was embedded in the old entrance gate to the Castle, in the area of today’s terrace, was found broken on the banks of the Tarnava Mica river and was subsequently restored. In the large reception hall of the Castle, there is a stone portal, carved in Renaissance style, which decorates the entrance to the Clock Tower. On the oak staircase, built in a perfect spiral, without any metal joints, only wooden nails, access was made to the upper levels until the construction of the gable. In Europe there are only a few wooden staircases from that period preserved as well. The walls of the staircase house a unique collection of peasant clocks and pendulums dating from the early 19th to the early 20th century.

The bottom of this staircase is said to have led to a tunnel that was used for carriage travel and linked Bethlen-Haller Castle to Bethlen Castle in Sanmiclaus, 15 km away. A beautiful legend, but difficult to prove.

The second floor has been restored and four rooms have been set up in the towers for accommodation. The spaces between the towers were designed and built as exhibition spaces for various collections of old glass, old books, etc. In this area, an area with the original oak flooring was restored. 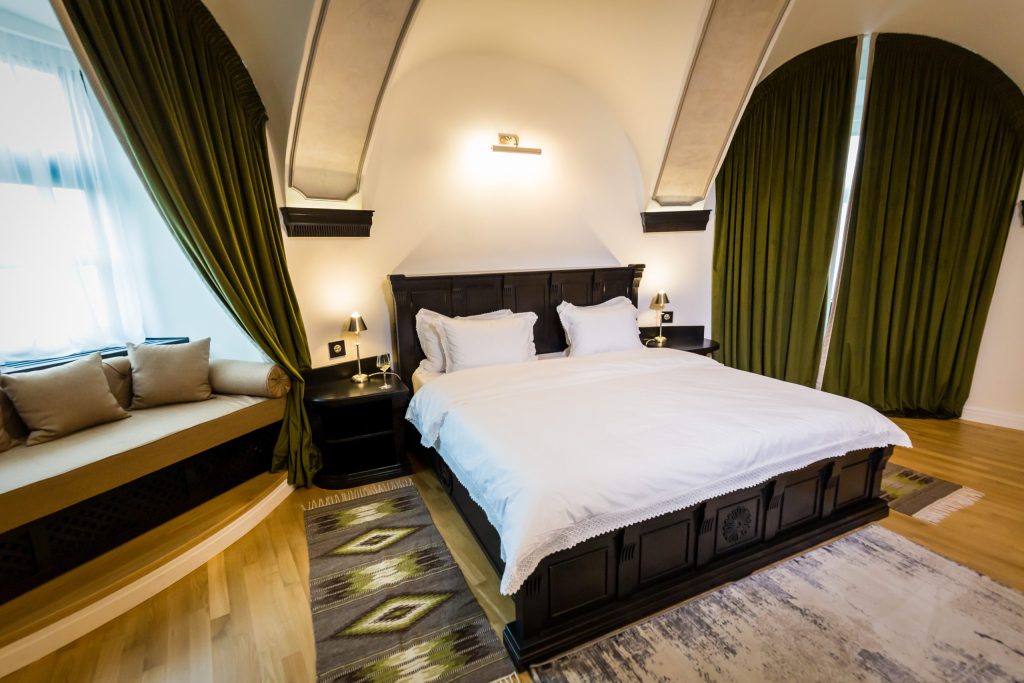 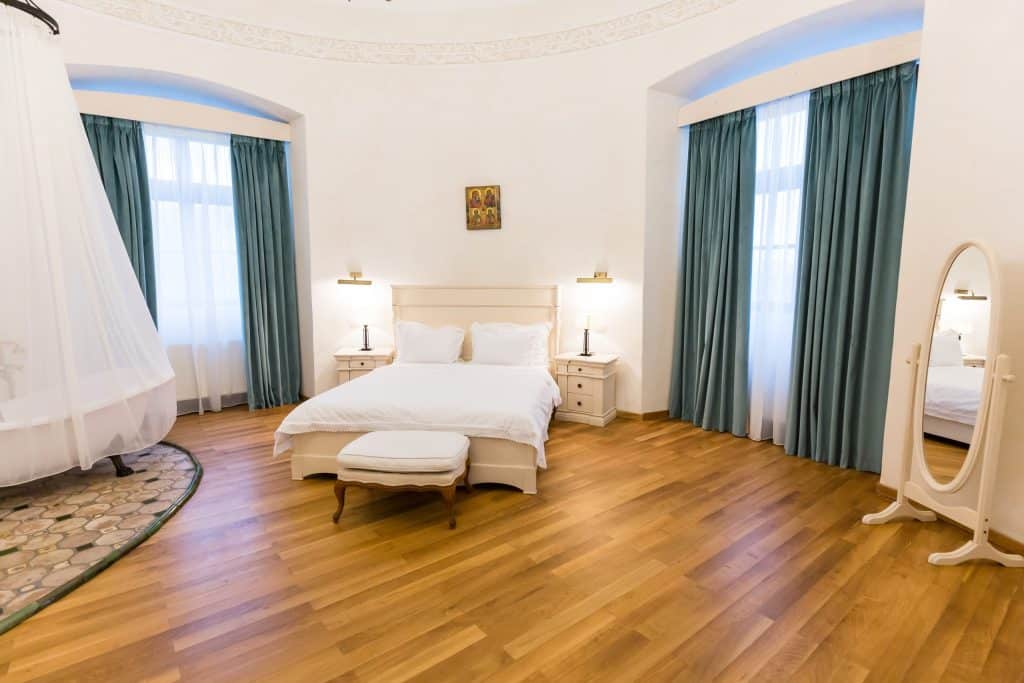 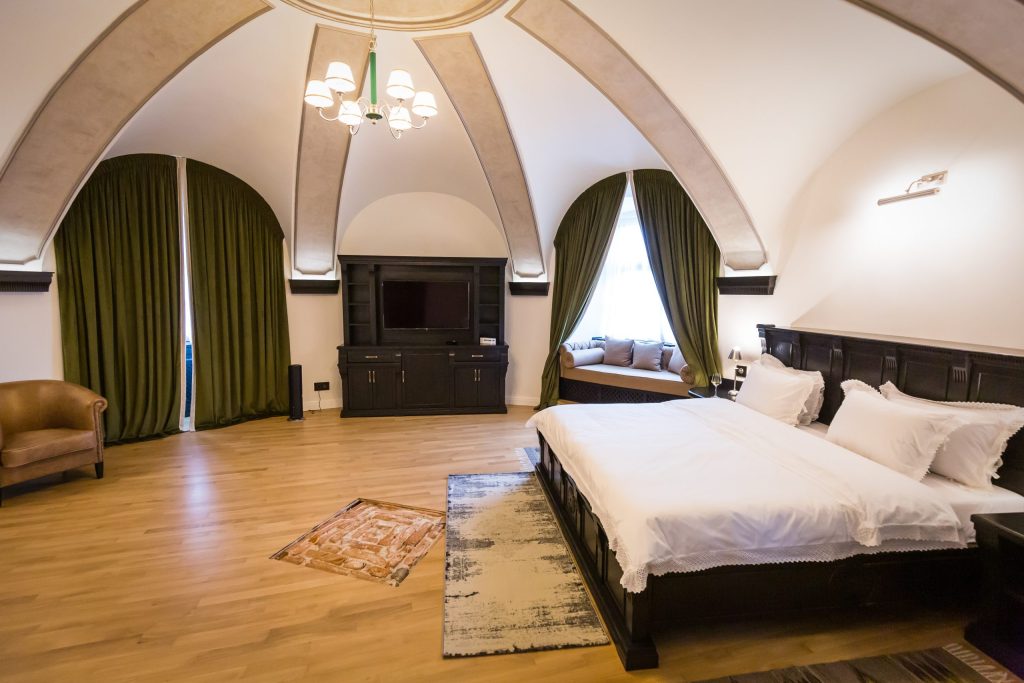 From the large reception hall you descend to the large tasting room on oak steps dating from 1560. In the time of the Haller groom, this was the kitchen with its outbuildings where the hunt was prepared, the vegetables were cleaned and the cooking was done. Now in two of the towers there is a valuable wine cellar, there is a pantry with goodies prepared at the Castle, an area where quick tastings can take place, standing, and another where more elaborate tastings and festive meals can be held. 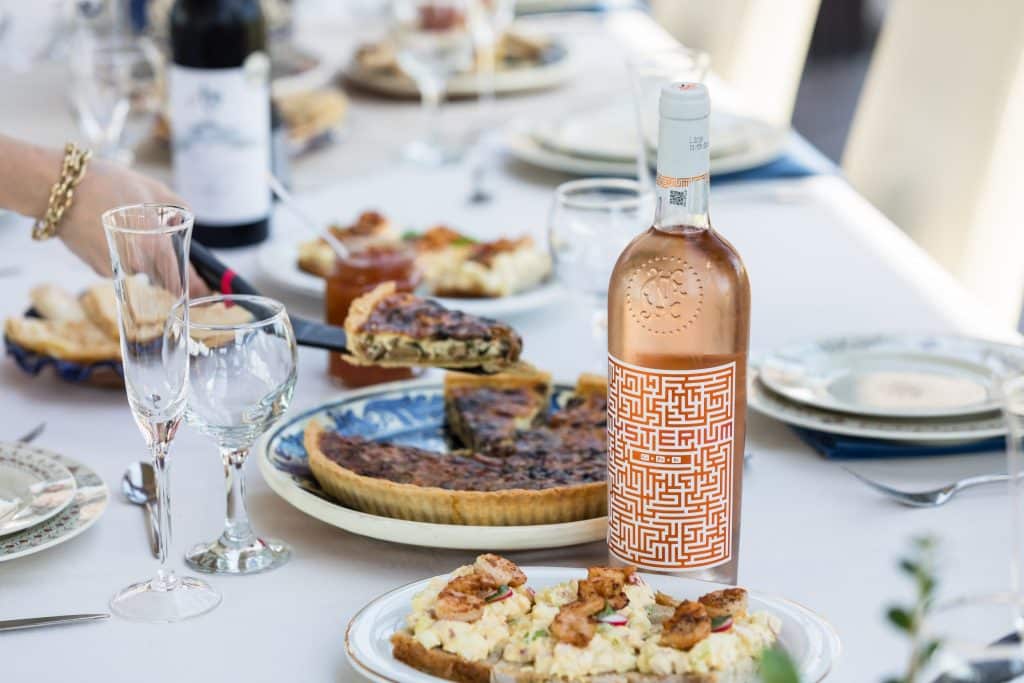 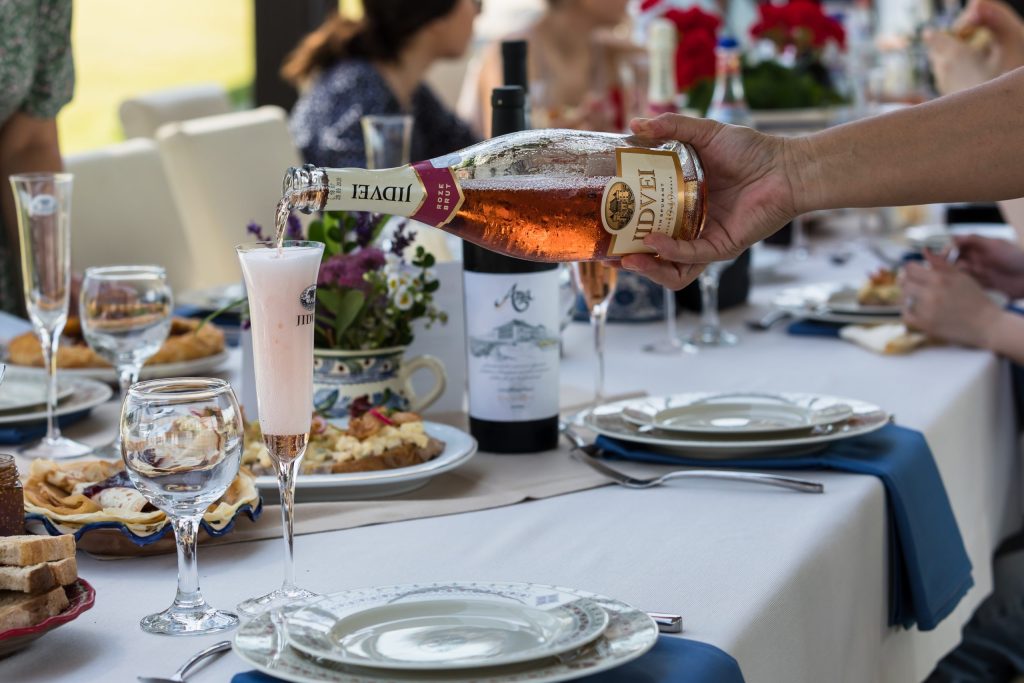 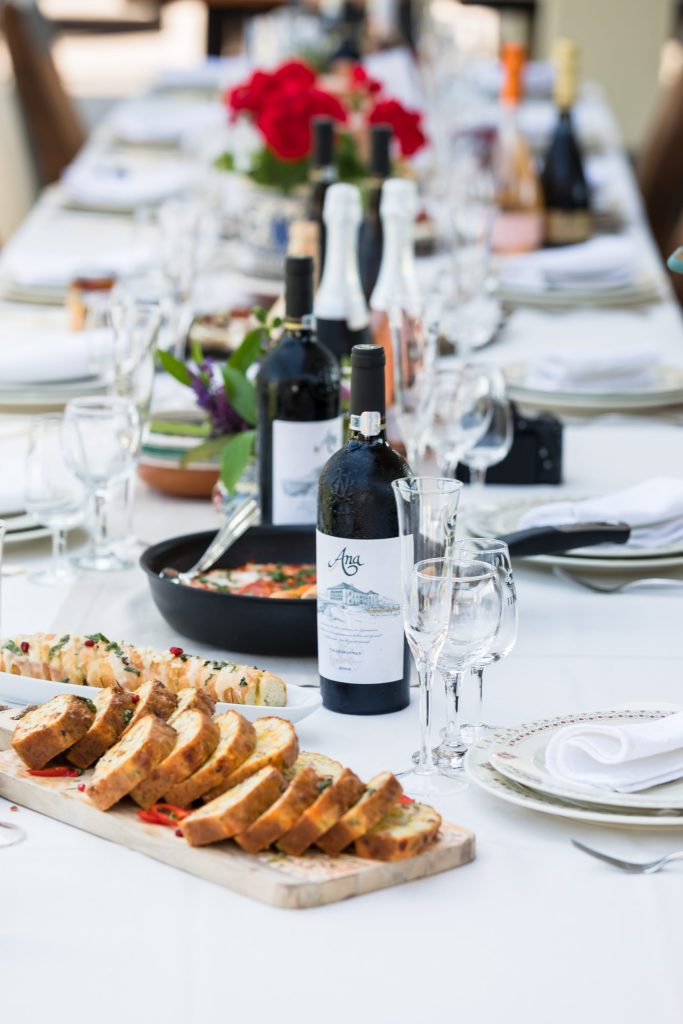 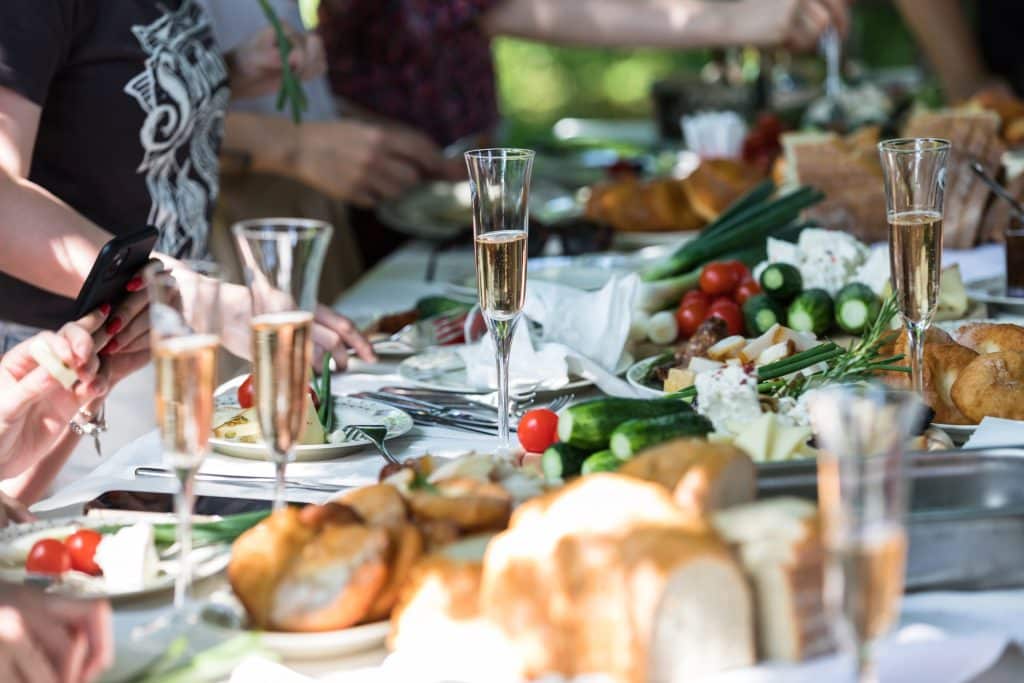 Out of concern for a healthy lifestyle and the desire to support the local community, the professionals at Jidvei have integrated the healthy food-healthy life principle into the way their restaurant operates. Together with the team of chefs, gardeners, farmers and local producers, they have set out to offer visitors the best culinary dishes inspired by traditional Transylvanian cuisine, but also by international gastronomy.

From farm to table is, for Jidvei, more than just a concept because they believe that what we eat influences our well-being and the harmony in which we live with the environment – this is the reason for using as many ingredients as possible from their own farm, located on the Castle’s domain. 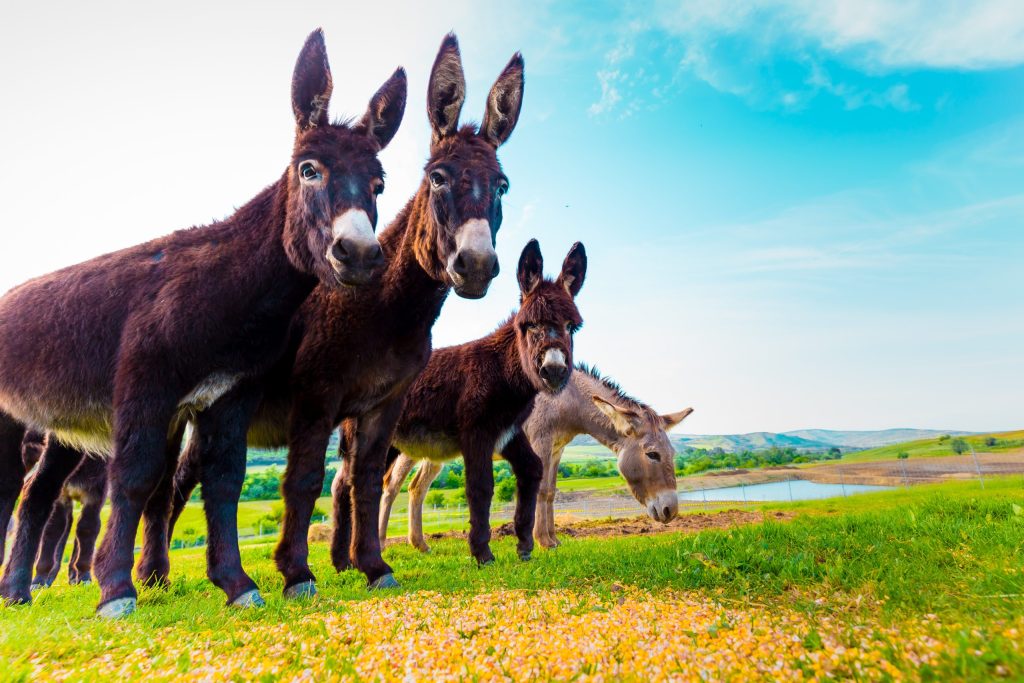 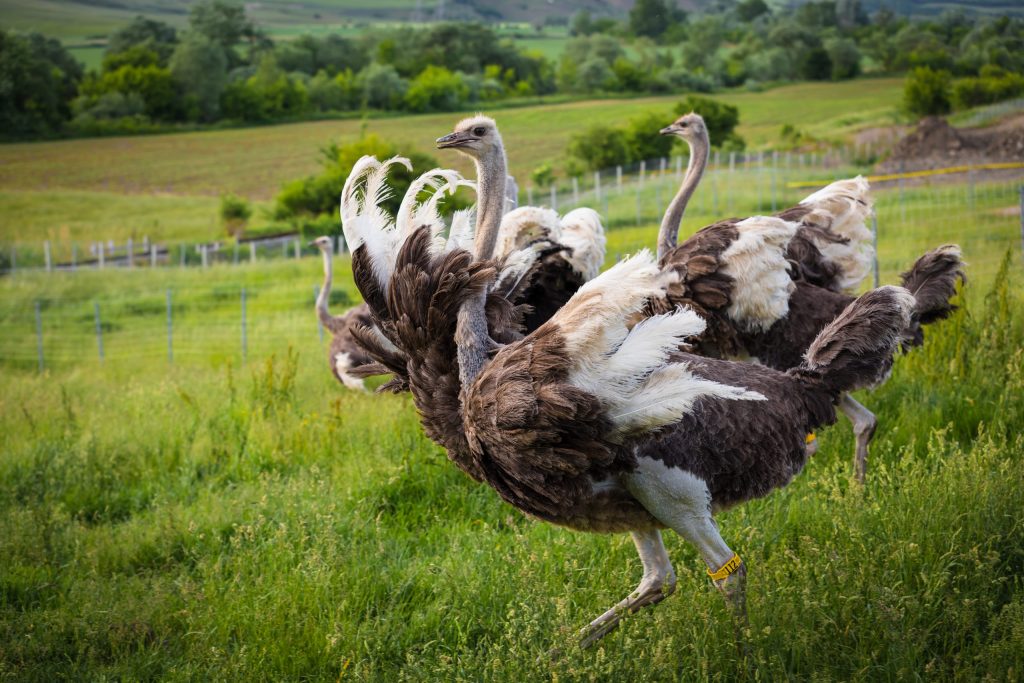 The approximately five-hectare garden on the estate is cultivated organically – 2022 being the second year of conversion to organic farming – and in order to have fresh vegetables, fruit and herbs for as long as possible, the sowing of crops is staggered. They purchased most of the seeds used from Romanian research stations. 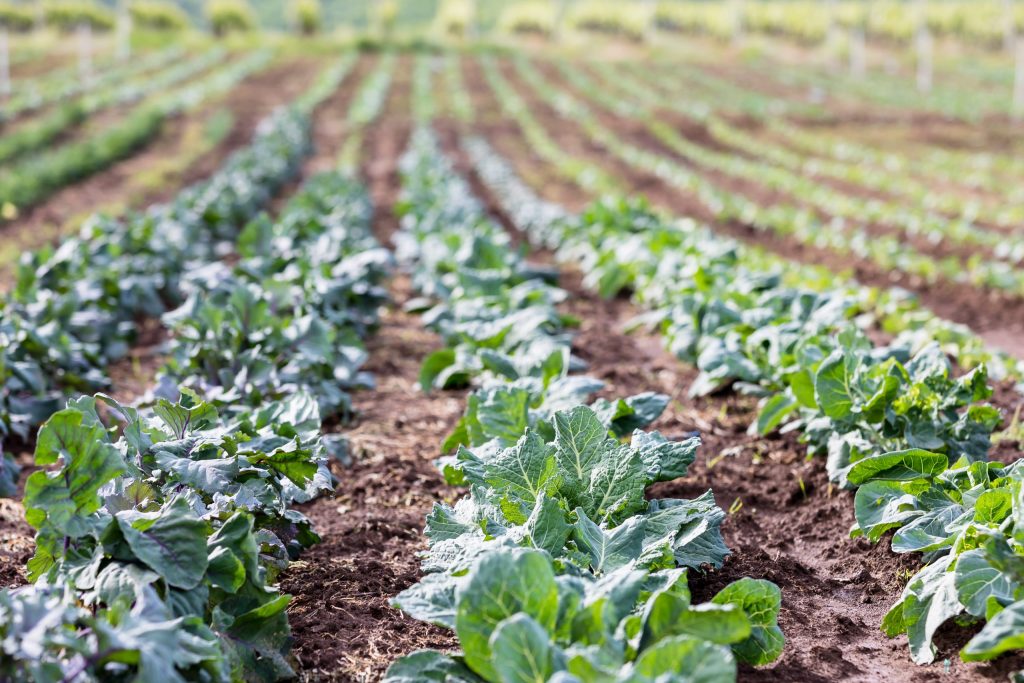 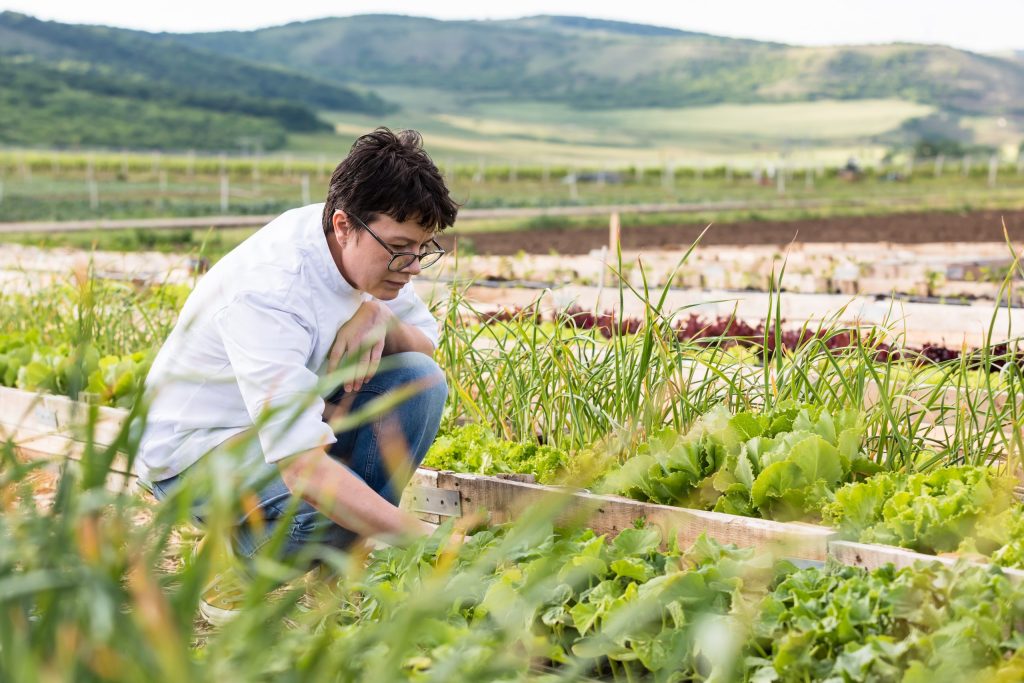 Bethlen-Haller Castle is an enchanting destination, and for a memorable experience, the hosts have also prepared a series of recreational activities, such as horse riding lessons, riding demonstration in the riding school, horse riding on the nearby trails, carriage rides, archery, bicycle rides in the surroundings.

You will be able to visit the castle, the farm and garden, the vineyards and the wine cellars, you will enjoy tasty culinary dishes and you will have the opportunity to discover more about the world of Jidvei wines during tastings. 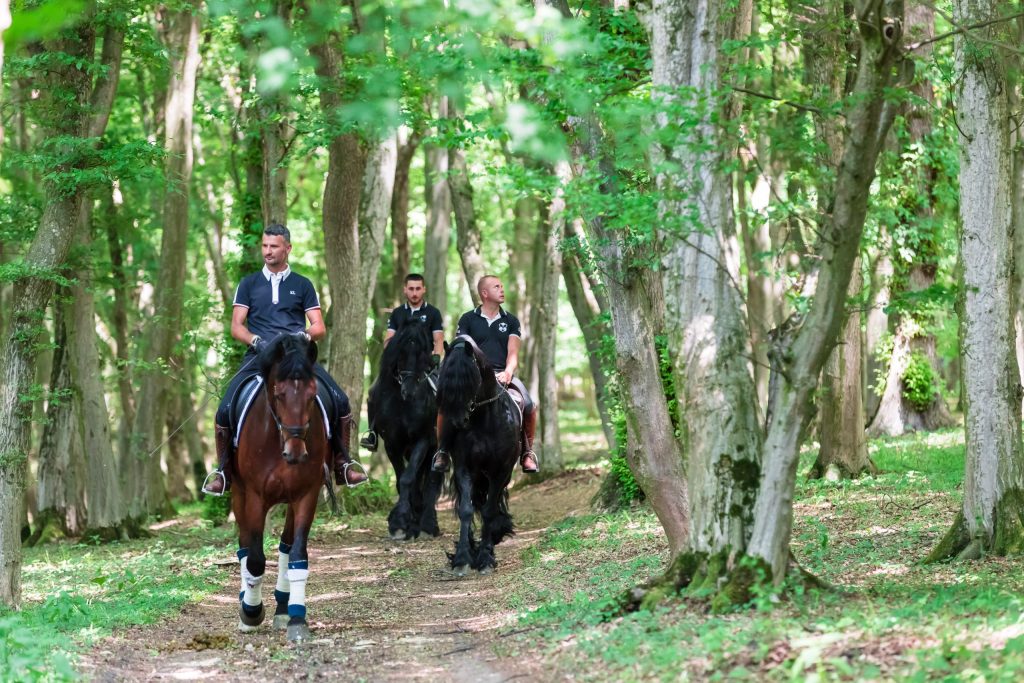 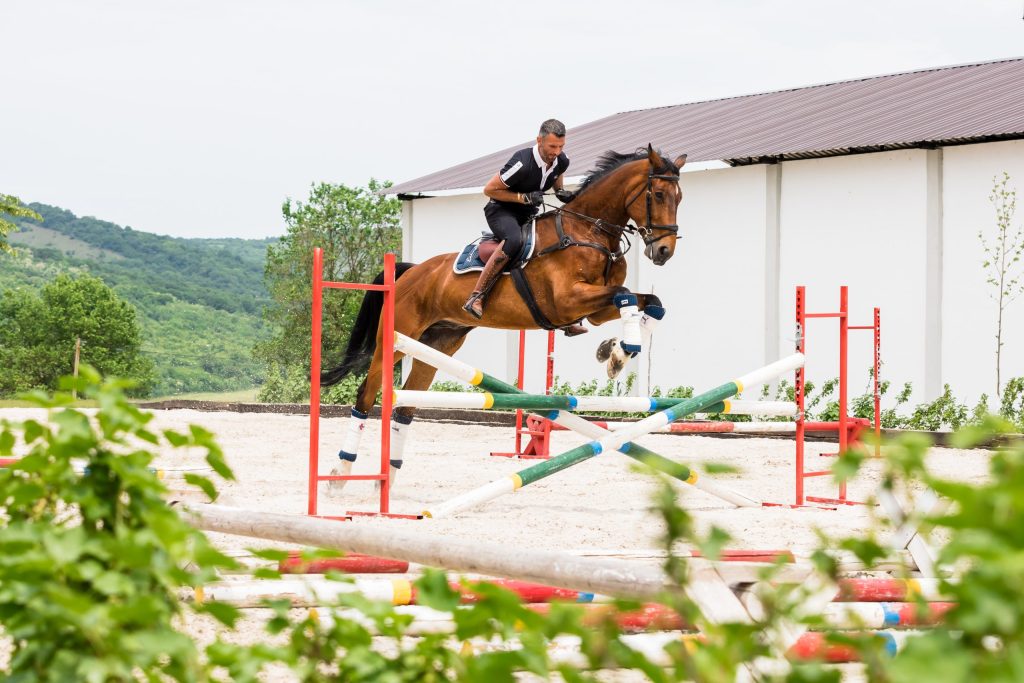 How to make a reservation

In conclusion, the hosts have prepared a lot of time for the guests to enjoy the beauty of this place, the hills covered with vines, the Jidvei wines that bear not only the imprint of the Tarnaves soil, but also the simple joy of life here. All the more reason to choose to visit this memorable place on the wine tourism map of Romania.

You can ask for more details about the leisure activities and special programs offered by Jidvei at the phone number – 0753992255 or write to the e-mail address – castel@jidvei.ro. Information about the visiting program and tasting packages you will find on www.jidvei.ro/castelul-bethlen-haller/.

*There are 15 rooms for guest accommodation (7 rooms in the inner courtyard and 8 rooms in the Castle), but at the moment they are only available under special programs – corporate & retreat.

Material published with the support of pr department Jidvei.