GOLD INTERVIEW. Mihaela Tyrel de Poix, owner and CEO of SERVE Winery: “Everyone who crosses our threshold at the wine cellar feel they have arrived home” 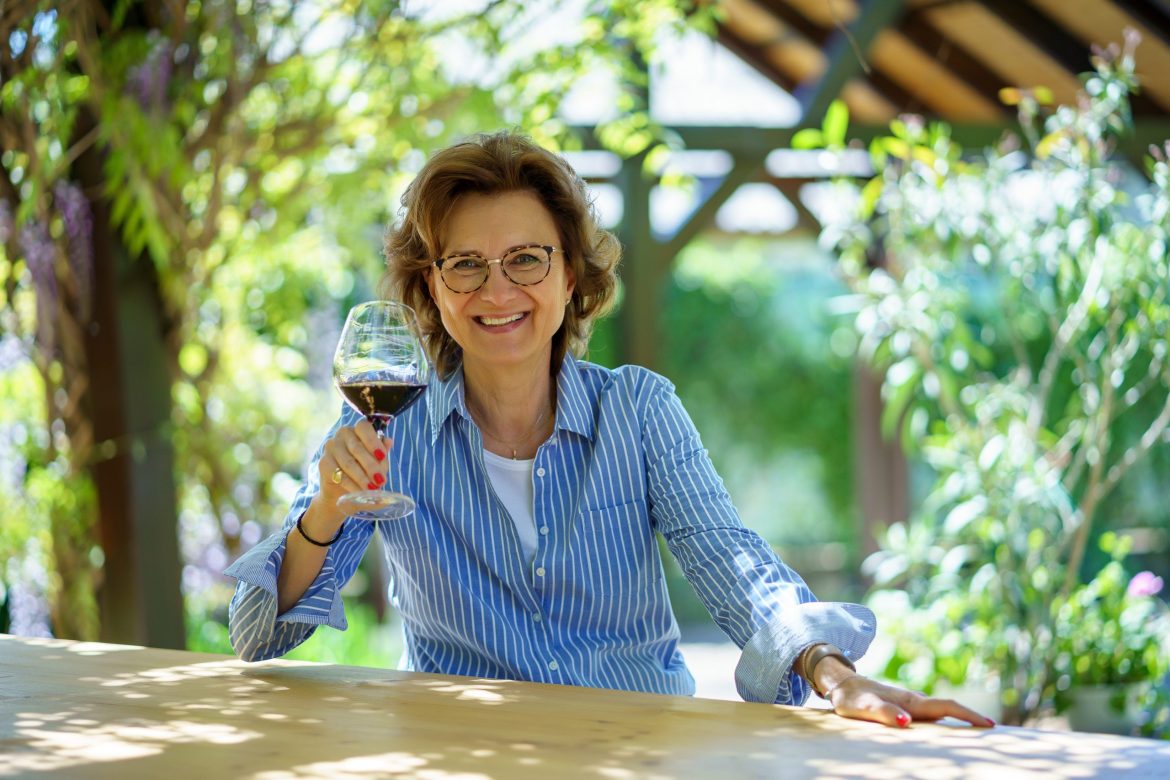 For all those who know in detail the success story of SERVE Winery, it is quite clear that nothing that happened in the history of the winery would have been possible if it had not been aligned, somewhere in the Universe, some stars.

The arguments are obvious. A French count, Guy Tyrel de Poix, heir to the Peraldi Estate, in Corsica, where his father had planted 40 hectares of vines, goes out into the world, in the early 90s, to discover opportunities to invest in viticulture. What were the chances that, although the first three elections to invest were Chile, Hungary and Bulgaria – to choose Romania?

Then, what was the probability that Guy Tyrel de Poix, a dentist by profession, would meet, in Romania, Mihaela Badea, railway remote control engineer – the future lady of Poix, and this meeting to be decisive for the appearance of the first private wine company in the ’90s?

Further, what were the chances for the count’s meeting with the oenologist Aurel Rotarescu to be the prelude to a series of national premieres? Because, in a short time, SERVE became the first private wine producer in Romania (1994); he put on the market the first Romanian dry roses (1995) and the first Romanian Cuvee – Cuvee Charlotte (1998); made the first association of local and international varieties (1999).

Without a doubt, it’s a story worthy of a movie script. One more reason to learn more about SERVE right from Mihaela de Poix, the one who carries on, with the same passion, the dream of the Corsican count in love with Romania.

You are the owner and CEO of a winery that has impressed, with its wines, since its establishment. I don’t think there’s any wine lover of your winery who doesn’t know that SERVE wouldn’t have existed without the late Guy Tyrel de Poix.

What were the biggest challenges you had to face, starting in 2011, to fulfill the vision of the group’s president and founder?

That’s right, Guy’s courage and inspiration made it possible to set up serve; I would mention here the merit of Guy to have opened the way to modern viticulture in Romania; those who worked in those times know that in the ’90s our viticulture was a generation behind the European wine-growing countries, from all points of view.

The biggest challenge was, both for the team and for me personally, to develop the line of vats that Guy had initiated in the spirit of integrating the notion of family into the business he created away from his home: very involved with us in the wine creation part, he was, always, the one who drew the quality direction of our wines: finesse, elegance, a certain discretion of flavors, elements that characterize our wines even now, which Guy characterized as "feminine". So, in the first years we lacked his spirit of analysis and his opinions with which he orients the personality of each come in part according to the character he represented. Only in 2014 we managed to launch, after three years of waiting, the famous bowl that bears his name and which confirms , since then, Guy’s love and trust in the Feteasca Neagra variety. Thus we knew that we were on the right path and we continued with the creation of representative wines for each (new) member of the family.

As far as I’m concerned, there was another challenge: to manage, besides SERVE, which I was used to, and Guy’s domain in Corsica, Domaine Peraldi, a family legacy of many generations. The Peraldi domain came with a great load of responsibility but also emotional, being related to Guy’s family, and had to be managed from the spot in the first stage. I am pleased to see that this project is also on the right track and confirms the permanence of our long-term visions.

Behind the success lies, beyond passion, a lot of teamwork. Besides the well-known oenologist Aurel Rotarescu, who are those who are with you, every day?

I have always considered that a family company such as ours (and I wonder, more and more often, if it does not apply to larger companies) needs a quality, welded and stable team that feels that it is part of a family and works based on common insight and goals as a family. I consider myself a lucky person to work with people who started their careers with us, such as Aurel. If we talk about the people in the vineyard, coordinated by Doina POPA, or by the team from the wine cellar under Aurel’s command, by Dan NAFTANAILA who has all the organization, investments and development, or by the team formed by Alina, Geta and Georgeta who have in their charge the human resources, accounting and our finances, I can say that serve team is a team with tradition, who identify with the company’s goals as members do to a real large family.

What perspectives does the Romanian wine market have, in 2022, in a period that promises to be extremely difficult from an economic point of view?

That’s right, the fact that we will face recession and global inflation has become a reality; Unfortunately, the wine market is disturbed for many years by climatic disorders and not only. In Romania, which is a young market if we look from the perspective of the dynamics of the wine offer, but also of the preferences of the public, we cannot expect "silence".

If at the beginning of the year we expect an increase in wine consumption, especially in the HoReCa channel, where we achieve the majority of the figure in the local market, after February 24, the forecasts had to be reviewed: disorientation, prudence and more recently the decrease of the purchasing power will definitely say their word, and this on all sales channels; we expect the pressure on prices to continue; so we are preparing for another challenging, demanding year, and we hope that we will pass it well, as we have passed the last 28 years and several other crises.

As the owner and CEO of a winery, you definitely love wine. Do you have a personal tasting ritual?

I think that "ritual" is much said: if we talk about professional tastings, we taste together with Aurel and Sabin, his disciple, just out of the faculty in Cluj, but also with other members of the team; in these cases it is a procedure rather than a ritual: we take care to be rested, the tastings are always done around 11 am (when the senses are alive, because the time of breakfast is approaching), in the same room, bright and without foreign smells. It is very useful to taste in a team: thus, each of us can periodically calibrate our senses.

Regarding the enjoyment of a wine, I really have some conditions from which I do not deviate: the glass (to have a thin lip and, of course, foot), the temperature of the wine, both in whites and roses, but especially in tomatoes (I admit that I am very picky about the temperature of red wines) and the company in which I am.

In the last decade, oenological tourism has grown exponentially in Romania. What sensory experience is offered to a wine lover visiting the SERVE wine cellar?

All those who cross our threshold at the wine cellar feel that they have arrived "home". Then, we let the wines speak, accompanied by us who made them. We are very glad to see the growing interest of wine lovers for visits to wineries: it is one of the best ways to bring consumers backstage" to wineries, so closer to wines.

In fact, we are proud of the fact that SERVE has been a pioneer in organizing these visits, both for the professional public and for those who love wines. We continue to develop towards this activity in order to bring to us, more and more, the wine audience.

If you were to visit, at the wine cellar, some young people who have recently discovered the wine, what labels would you recommend them to start with and how would you convince them that the wines from SERVE are an essential experience in the oenological journey they have just begun?

Very good question. Especially since there is a perception that the world of wines is a sophisticated, exclusive world, and the sensory analysis of wines keeps away those less initiated, raises barriers in accessing wine in general.

Therefore, we recommend young people to start with two categories of wine from us, categories that are intended for them: the first would be rosettes that, although dry, suggest sucroseness through the floral aromas extremely present, being thus easier to understand by the more sensitive papillae of young people; the other category are the mono-variety wines: we recommend as white varieties the aromatic ones (Sauvignon Blanc and Chardonnay style) that have flavors that can be easily associated with fruits consumed currently (grapefruit, peaches, melon) and as red varieties we recommend Pinot Noir, for the delicacy of tannins and cherry flavors extremely easy to identify. And finally we like to conclude that «the best wine is the one drunk with pleasure and told together with nice people».

What will be the direction of the winery in the coming years?

We intend to keep the same line of our products, which does not mean that we do not prepare some surprises that we keep our pleasure to reveal to you at the right time.