In less than two decades, underwater wine cellars were founded in Italy, France, Spain, Greece, the United States of America, Chile, South Africa and Australia, and the first Underwater Wine Congress, held in 2019, was attended by 31 such wineries

The story of underwater wine cellars and bottles of wine matured on the seabed began more than two decades ago, in the late 90s, thanks to an Italian artist turned sommelier. Pierluigi Lugano opened his wine cellar in 1978. Initially the owner of the Bisson wine and art store, Lugano was forced by the lack of space to look for an alternative method of storing his wines. After the classic odyssey for obtaining agreements from the authorities, specified, it seems, to all latin peoples, it received the green light to sink, in 2001, the first batch of sparkling wines obtained, by the classical method, from indigenous varieties grown in vineyards overlooking Golfo Paradiso on the Mediterranean Sea. When the wines of the sommelier-artist reached the bottom of the sea, off the coast of Portofino, in the Liguria region, he did not suspect that, after a few decades, his idea would be taken over by dozens of wineries, from all over the world.

From a wreck, to "Cellar in the Sea"

Then hazard also played a role in promoting the idea of a wine cellar under water: in 2010, the discovery of a ship that sank in 1880 off the Aland Archipelago in the Baltic Sea, between Sweden and Finland – about whichWines Of Romania recently wrote -, and the finding on board the wreck of 168 bottles of champagne encouraged the appearance of more underwater wineries in Europe. After a series of research projects, in 2014 was born the project called "Cellar in the Sea" – "Cellar in the Sea". Over the next four decades, this project aims to become an essential source of discoveries and experiences in the field of underwater wine cellars.

Specialists give the verdict

The wine experts consulted studied the centenary champagnes recovered from the seabed and concluded that the storage of the bottles on the seabed ensures the optimal conditions for the process of aging of the wine. The constant temperature, semi-darkness, immobility and pressure generated by underwater currents are just some of the arguments of an ideal environment for underwater storage of wines.

Research has led to discoveries or inventions in this new field. For example, Bisson created and patented a special stopper with a layer of steel, resistant to the aggressiveness of salt erosion.

Mediterranean, the spiritual capital of innovators

In less than two decades, underwater wineries were founded in Italy, France, Spain, Greece, the United States of America, Chile, South Africa and Australia. Three years ago, the first Underwater Wine Congress was attended by no less than 31 underwater wine cellars from around the world.

The Mediterranean can be considered a spiritual capital for these innovators, due to the presence of wineries of this kind in Sardinia – Alghero –, Liguria – Portofino and Sestri Levante – on the Adriatic Sea, in Ravenna and Croatia.

The winery was founded in 1978 by Pierluigi Lugano to continue the production of wines from Liguria, wines that had practically disappeared. The main types of grapes that grow here are Bianchetta Genovese, Vermentino, Pigato, Cimixa, Ciliegiolo, Granaccia and Sciacchettra.

The wine, kept in stainless steel containers, is stored at a depth of 60 meters, at a constant temperature of 15 degrees Celsius, for eighteen months. Only the best batch will be subject to the subsequent process. 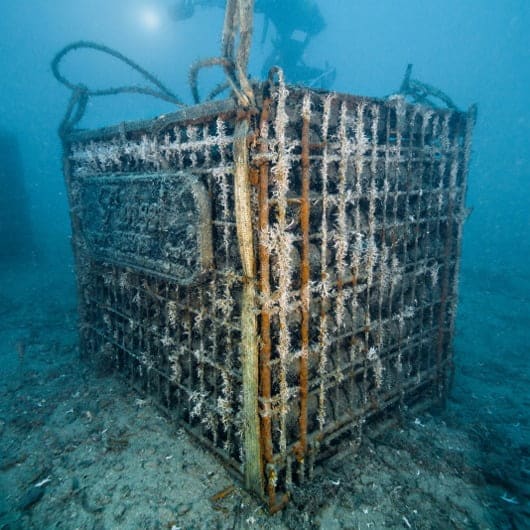 In the gorgeous Greek island of Santorini, Gaia Wines sinks the bottles to a depth of 25 meters for at least 5 years. Gaia Thalassitis Submerged is a liqueur whose production began as an experiment. Every year, the Gaia Winery deposits a small amount of bottles on the seabed of Santorini.

If in 2014 only three bottles were recovered from the seabed, in 2016 their number increased to five hundred. The owners of the winery continue today, successfully, their underwater adventure. 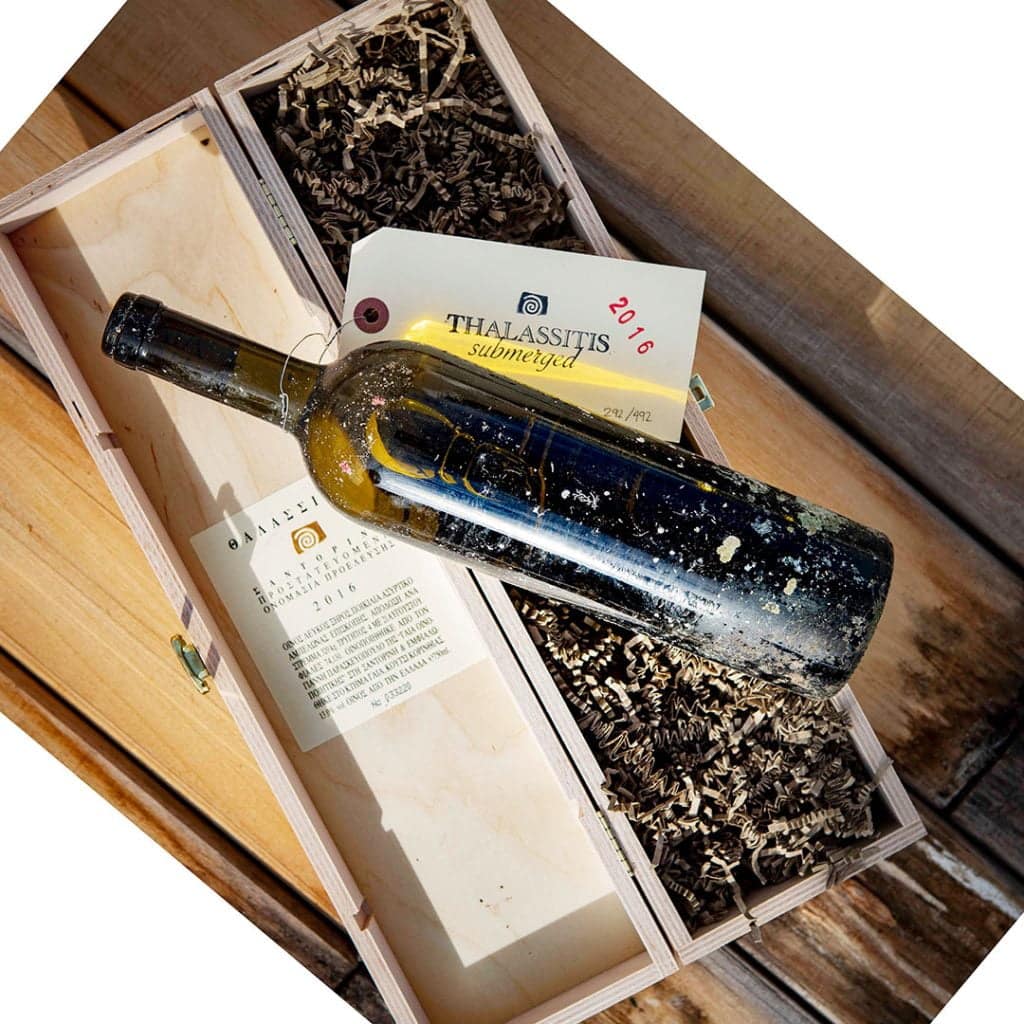 The latest project of the Carchelo Winery is a wine aged in the sea, on the Mediterranean coast. It is part of a special edition of 1,553 bottles, being the first wine matured under water of the winery. 1,600 sealed bottles of 2012 Carchelo Selecto wine were submerged in two steel cages, 40 meters deep, in the Mediterranean Sea. After a year of regular surveillance, the wine was again taken out into the world under the name Vinamaris Selected 2012. It is presented in a personalized box, winner of a National Liderpack 2019 Award for the best packaging for wines: imitating a wooden box rescued from the warehouse of a shipwrecked merchant ship. 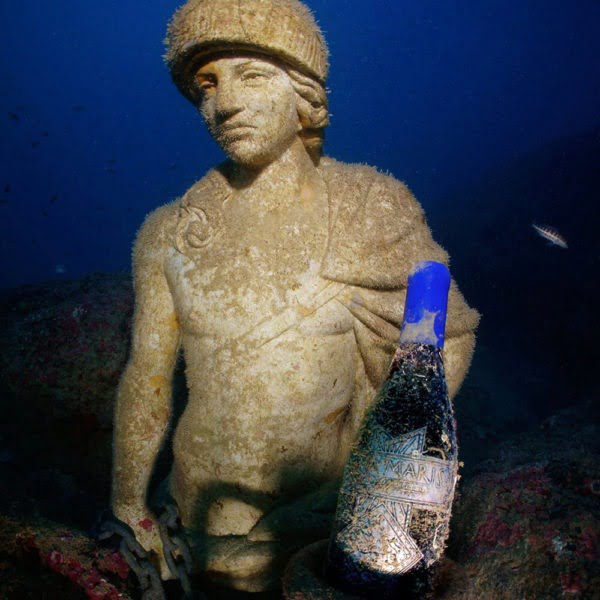 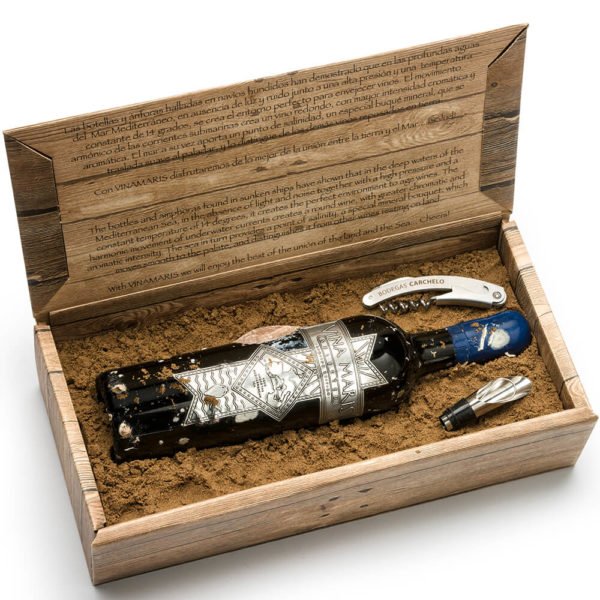 Chateau Larrivet Haut-Brion sinks part of Bordeaux or into the depths of the Atlantic Ocean. The idea belonged to Bruno Lemoine, general manager and winemaker at the castle. The planted area of the vineyard is 72 hectares, the cultivated grape varieties being: 55% Merlot, 40% Cabernet Sauvignon and 5% Cabernet Franc – for tomatoes; Sauvignon Blanc (60%) and Semillon (40%) – for whites. The average age of the vine is 25 years for red wine and 20 years for white wine.

Initially, the winemaker ordered two small wooden barrels of 56 liters, in which the red wine was to stay for another six months. One barrel was kept in the cellars of the castle, while the second was submerged under water among the oysters of Arcachon Bay. The barrel kept at the castle was named "Tellus", after the Roman goddess of the earth, and the other "Neptune" after the god of the sea. Neptune was chained into a concrete enclosure that protected it, while letting water in and out. The barrel could roll with the current and was very windy and weathery, being briefly exposed to air, about 25 or 30 times in six months. Conclusion, at the end of the experiment: Neptune turned into a more complex wine than Tellus, and the analyzes confirmed that the wine was subtly modified by the oceanic environment, losing some of its alcohol content.

Each 0.75 liter bottle is sealed in a clay amphora protected with a special stopper and two layers of rubber. Amphorae are submerged in the sea, at a depth of 18-25 meters, where they remain over 700 days. This is the process that results in the appearance of Navis Mysterium, a unique wine in Croatia. It is a boutique wine, in limited edition, made from plavac mali native grapes. Lovers of adventure, wine and the sea are offered the unique experience of visiting one of the underwater cellars. A limited number of Navis Mysterium bottles and amphorae are kept in a sunken boat near Žuljana. There are organized, on request, supervised dives in which tourists can enjoy spectacular underwater landscapes and visit the underwater wine cellar. 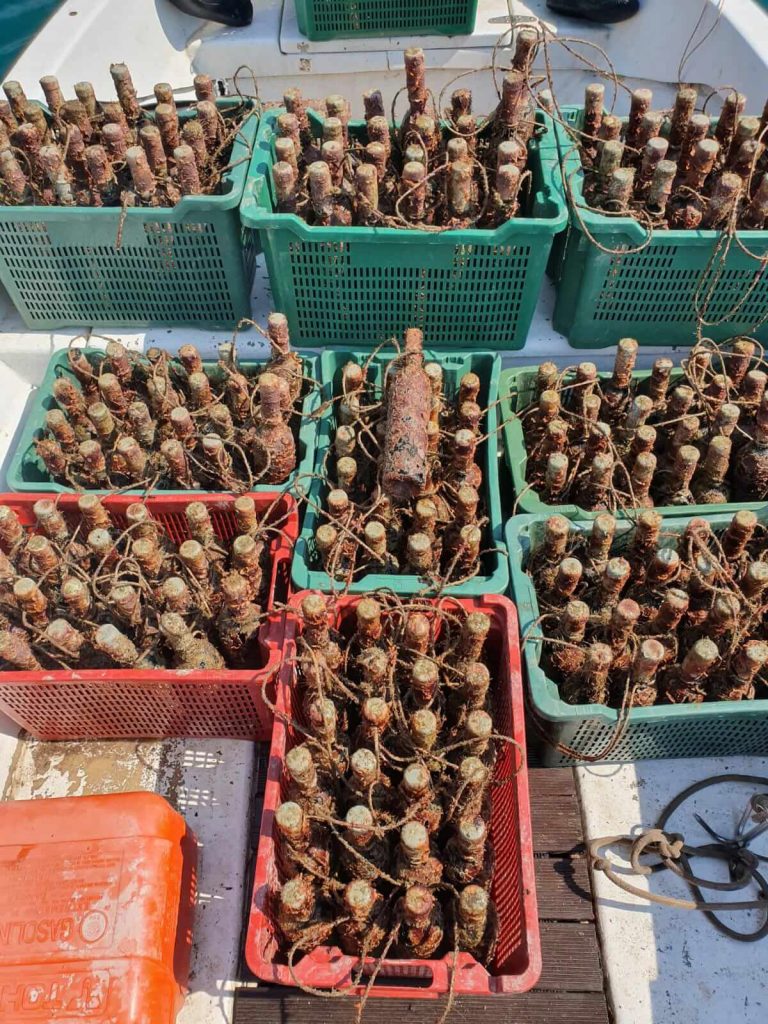 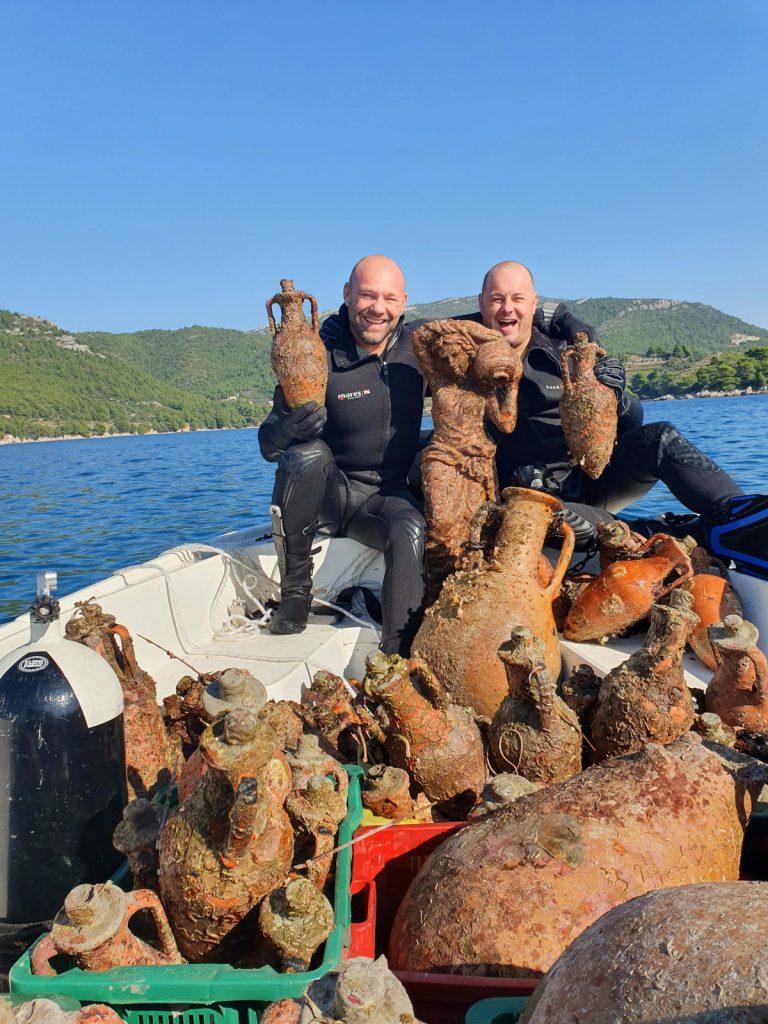