LOGIN
Home All A strange secular tradition: The Battle of the Wine
All

A strange secular tradition: The Battle of the Wine 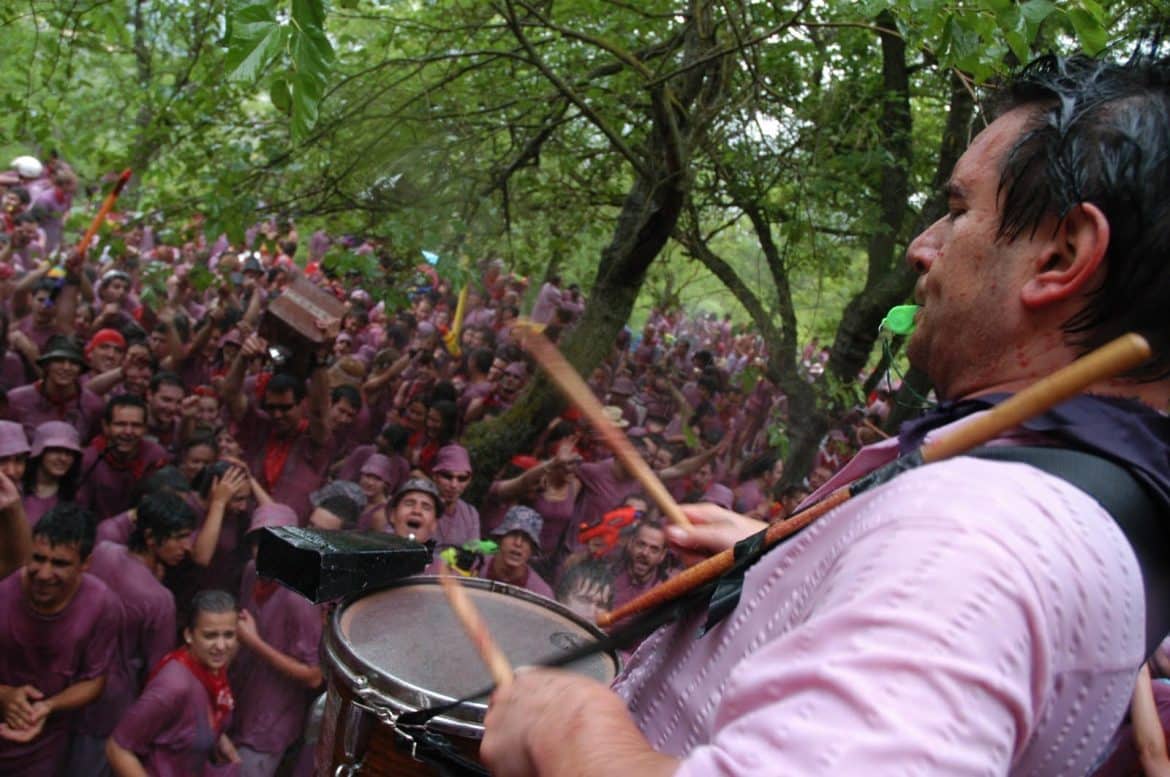 According to the organizers, during this year's battle, the five thousand fighters had about 40,000 liters of wine as ammunition.

An unusual wine festival is taking place in the Rioja region of northern Spain. On the 29th of June every year, on the feast of St. Peter, shortly before seven o’clock in the morning, pilgrims dressed in white, carrying with them thousands of litres of wine – ammunition for a strange battle to come – set off for the place called Riscos de Bilibio, either on foot or in tractor-drawn trailers. The procession crosses the town of Haro, to the cliffs of Bilibio.

After the service, everyone arms themselves with what best serves the purpose: water pistols, bottles and sprayers – all filled-eyed with wine. Once armed, the fighters head for the battle site, about six kilometres north of Haro, in the Riscos de Bilibio area, near Las Conchas, where the Ebru River enters La Rioja.

According to local legend, the battle, which over the years has become a war festival, began following a land dispute between Haro and the neighbouring town of Miranda De Ebro hundreds of years ago. The wine battle lasts a few hours, after which participants head back up the mountain to the Plaza de la Paz, where the celebrations continue with tapas, drinks and dancing. But there is another version of the origin of this event.

Saint Felices of Bilibio lived and died in the 6th century, in the place where he is commemorated. Since then, pilgrims have visited and venerated the place. The pilgrimage seems to have become more organized with the construction of the first hermitage on the rocks in the early 18th century.

The transformation of the pilgrimage into what is now known as the Batalla del Vino was due, according to other sources, to incidents that took place during the lunch meal attended by the pilgrims. The host was accompanied by copious amounts of wine, which encouraged people to sing and joke, jokes that usually ended with wine sprinkled on the eaten, wine that had to be drunk directly from the boots.

At the end of the 19th century, the sprinkling of wine and the staining of clothes displeased especially the ladies on pilgrimage, so that the number of those participating in the event decreased dramatically. But the wine splashing continued. By 1949, it had become so popular that it was then that the first mention of the generic name under which the event would be known for decades to come dates back to: Batalla del Vino – Battle of the Wine.

Returning to the actual battle, let’s note that every June 29, around half past eight or nine o’clock, depending on the year, the town mayor, who symbolically holds the command during the celebrations, opens the procession, on horseback, to the chapel of San Felices de Bilibio. After the banner is placed at the top of the rocks, a service takes place. At the end of it, the world arms itself with what it has at its disposal, with any container that can hold the main ammunition: wine. Then, a light signal shot into the air officially kicks off the wine battle, and the cheers begin to enliven the eager crowd gathered in the nearby fields.

Around half past ten, when the ammunition runs out (about 40,000 litres in 2022, per 5,000 participants), the "survivors" struggle to dry their wine-soaked clothes. Then follows a feast of snails or "chuletillas al sarmiento" – nothing but traditional grilled chops.

At the end of lunch, the pilgrims return to Haro. At lunchtime, the procession reaches the entrance to the town, heading for the arena, where more bulls are released – and the fun continues with another level of adrenaline.